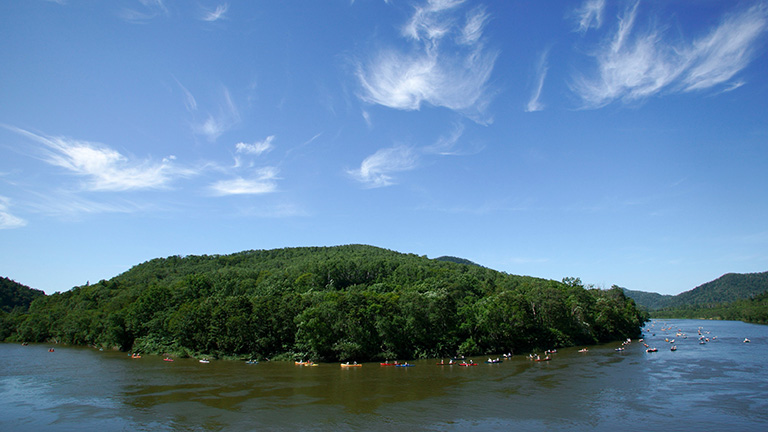 The Teshio River is a Class A river that has its source in Mt. Teshiodake (1,558 m) of the Kitami Mountains, flows down northward while meandering through plains and mountains, runs through the Teshio Plain and pours into the Sea of Japan from Teshio Town. In the basin of its tributary, the Sarobetsu River, the Sarobetsu Marsh that belongs to Rishiri-Rebun-Sarobetsu National Park spreads and diverse marsh plants can be seen in the primeval flower garden.
It is said that MATSUURA Takeshiro, an explorer in the Edo period, came up with the name “Hokkaido” based on conversations he had with an elderly Ainu when he traveled upstream on the Teshio River with the help of local Ainu. Since there are no sluices or other structures across the Teshio River for 158 km from the estuary, it is popular among canoeists, as well as anglers who are after Japanese huchen and other fish.

River data
●Channel length
256 km (4th longest in Japan)
●Catchment area
5,590 km2 (10th largest in Japan)
●Origin of the river name
The name Teshio comes from tesi-o-pet (river with many weirs) in the Ainu language. Tesh means a place where a rock crosses a river in a weir-like manner, and is often associated with myths and legends.
* Reference: Hokkaido Place Names (YAMADA Hidezo)