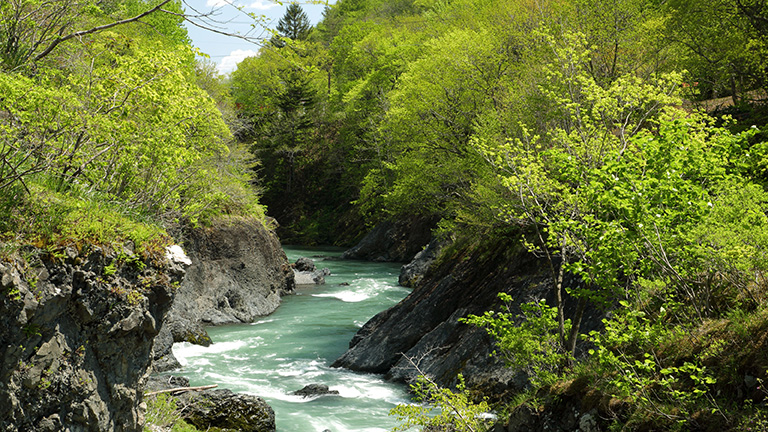 The Shokotsu River has its source in Mt. Teshiodake (alt. 1,558 m) of the Kitami Mountains and flows into the Sea of Okhotsk from Shokotsu-cho, Mombetsu City. Keshoyanagi (Chosenia arbutifolia) that are distributed in very limited areas of Japan grow in its basin, which is also a wintering spot and a stopping point of migrating white-tailed eagles and Steller’s sea eagles that have been designated as protected species by the national government. Salmon and pink salmon swim up the Shokotsu River where fry are incubated and released. It is also known as the first river in Japan where a catch-and-release section was established. Many people who like mountain stream fishing go to the river mainly for cherry salmon (landlocked masu salmon) and rainbow trout. It is a popular site for fly-fishing.

River data
●Channel length
84 km
●Catchment area
1,240 km2
●Origin of the river name
The name Shokotsu is said to come from sho-kut (waterfall with a sunken place) in the Ainu language, because there was a sunken place under a waterfall.
* Reference: Hokkaido Place Names (YAMADA Hidezo)