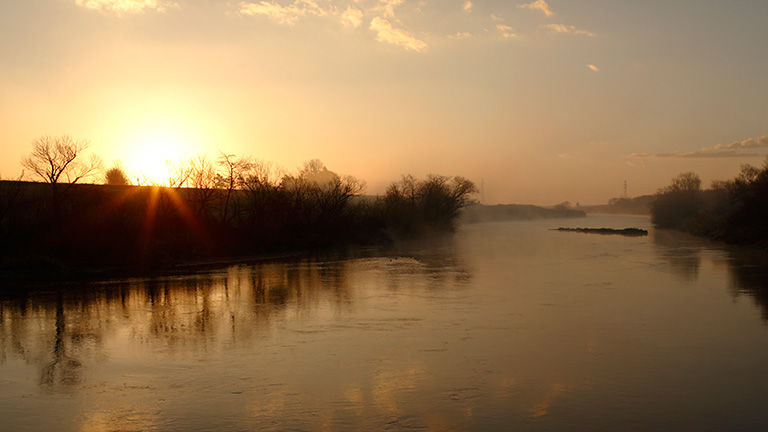 The Chitose River is a Class A river that flows from Lake Shikotsu, through Chitose, Eniwa, Kitahiroshima and other municipalities and into the Ishikari River from Ebetsu City. The river, where Japan’s first full-fledged salmon incubation and release project began in 1888, is still playing an important role as a major river where salmon swim upstream. In recent years, salmon swimming upstream and spawning have also been observed in its tributary Izari River in downtown Eniwa. Details of the relationship between the Chitose River and salmon can be learned at the Chitose Salmon Aquarium.
In the Chitose Salmon Park, salmon swimming up the river and getting caught by the “Indian Wheel” can be observed from both the bridge above and the underwater observation facility.
The downtown and adjoining areas by the Chitose River are used for having contact with waterfront nature, as well as for recreation activities such as canoeing and park golf.

River data
●Channel length
108 km
●Catchment area
1,244 km2
●Origin of the river name
It is said that the name Chitose was given by HABUTO Masayasu of the Hakodate magistracy, who felt the former name of the area “Shikotsu” was inappropriate as it sounded like shi (death) and kotsu (bone) and renamed it Chitose (thousand years) because cranes that were said to live for a thousand years came flying to the area.
* Reference: Hokkaido Place Names (YAMADA Hidezo)