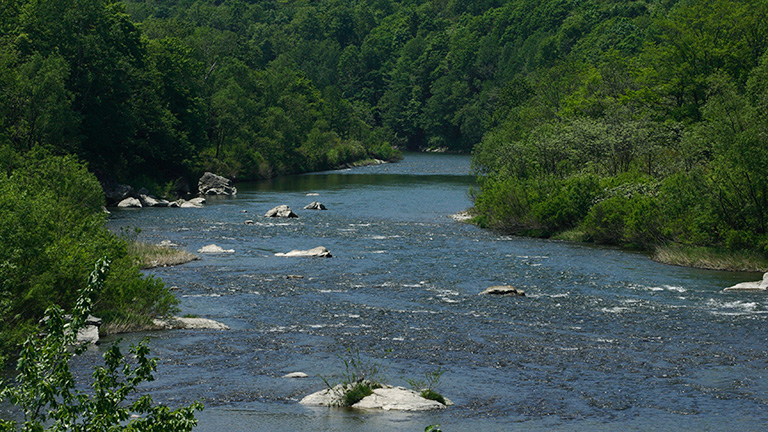 The Uryu River has its source in the central Teshio mountain range and pours into Lake Shumarinai, which is Japan’s largest dam lake. It then flows south through mountains into the Ishikari Plains and merges with the Ishikari River on the southern border of Moseiushi Town.
Lake Shumarinai was designated as a prefectural natural park in 1974. It is characterized by its landscape dotted with islands and looking like a ria coastline, and the lake is often used for the Lake Festival and other events. It is also known as a “mysterious lake” as ito (Japanese huchen) that are called “phantom fish” by locals lurk in the water. The lakeside is crowded with campers and pleasure-boat passengers in summer and people who enjoy pond smelt fishing in winter.
The upstream area of the Uryu River is richly cultivated with buckwheat. Horokanai Town and Fukagawa City rank first and second in buckwheat production in Japan. The Uryu river basin is a leading producing area of quality buckwheat, producing more than 90% of the first-class rated buckwheat in the nation.