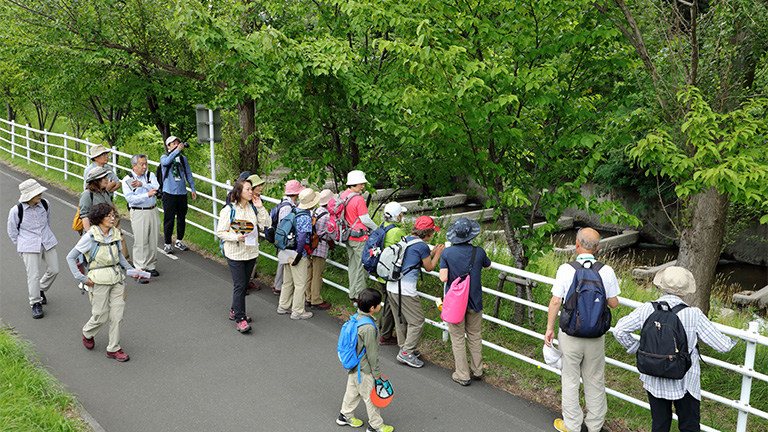 ［Photo Report］
Rediscovery the Charm of the Region by Walking Along the River!
Ishikari River System Footpath Tour

Wednesday, July 24, 2019
Learn about the connection between rivers, region, and people by walking
I participated in the Ishikari River System Footpath Tour!
Footpath is a path that allows you to walk while enjoying the scenery of old towns, fields, and forests. It is said to have originated in England. Eco Network, an environmental citizen’s group, organized the Ishikari River System Footpath Tour to let people feel the connection between rivers, communities, and people while walking along the Ishikari River System paths. This was the first of three scheduled tours. We walked the 5.4km course around the Makomanai River, a branch of the Toyohira River.

First, we gathered at Makomanai subway station. Everyone gathered one after another. The outfit is perfect! We were joined by a curator from the Sapporo Salmon Museum. It was my first time to go on a footpath, and even I, who had recently gained some fat in my belly, was excited. It was now 10:00 a.m., and we were off! 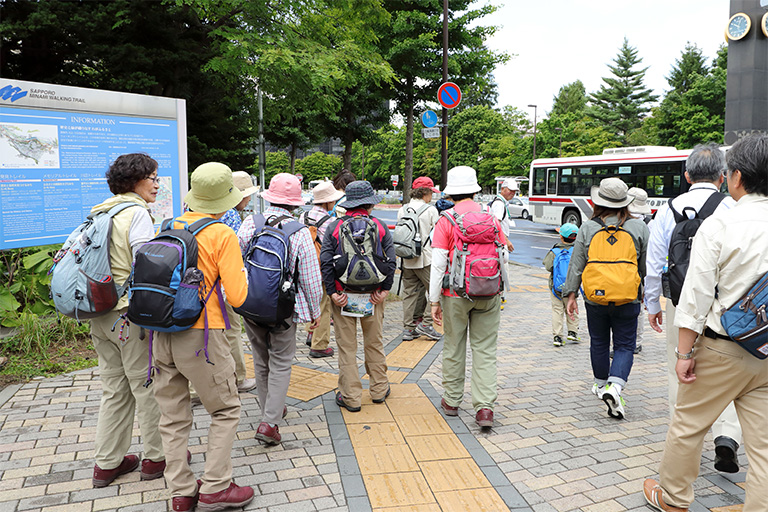 Our first stop was the Edwin Dun Memorial Park, not far from Makomanai Station. Edwin Dun, for whom this park is named, was the father of dairy farming who introduced and developed dairy farming techniques in Hokkaido during the Meiji era. In addition to a bronze statue of him, there is a memorial hall in the park. There is also an unusual tree, estimated to be 170 years old, where a yew tree and a cherry tree coexist. 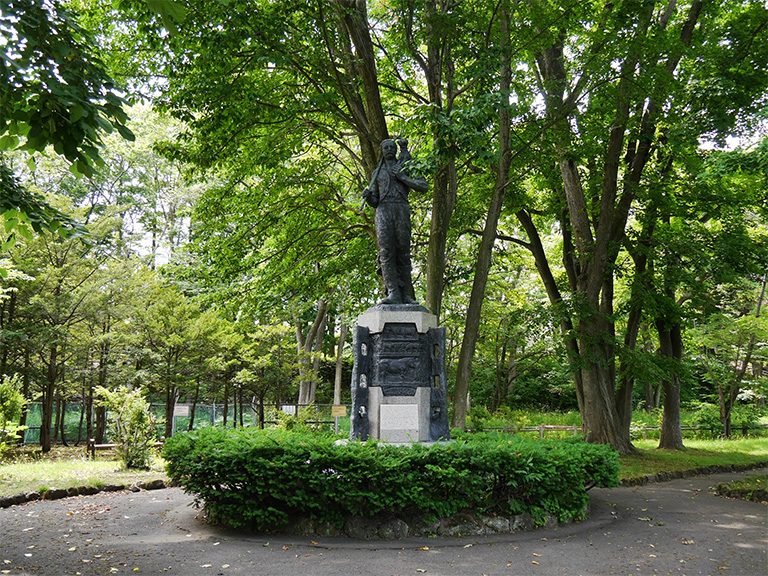 Crossing Makomanai Street from the memorial park, we reached the Makomanai River. Once I arrived at the river, it was a different world. Trees covered both banks of the river, and it was as if we were walking through a green tunnel. As we walked, the Sapporo Salmon Museum curator told us many stories about the Makomanai River and the cherry salmon that swimming upstream it. Everyone was listening intently. 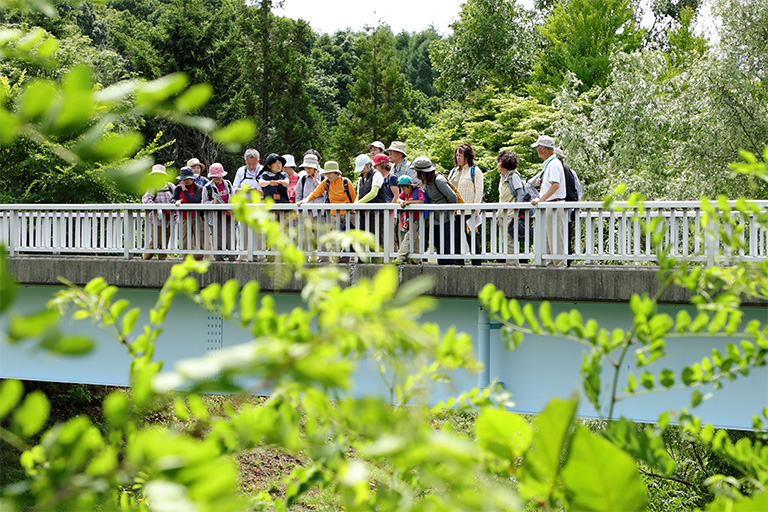 As we walked along the Makomanai River and listened to the sound of the river flowing, heard the sounds of many birds and cicadas, and saw walnuts growing on the side of the river, we arrived at Sapporo Salmon Museum. The walk was easy even for me, as we had followed the river down to this point. I was starting to sweat a little. I felt a little wiser as I listened to a detailed slide presentation on salmon research and projects and salmon spawning while watching salmons and various fish and other creatures living in the Toyohira River. 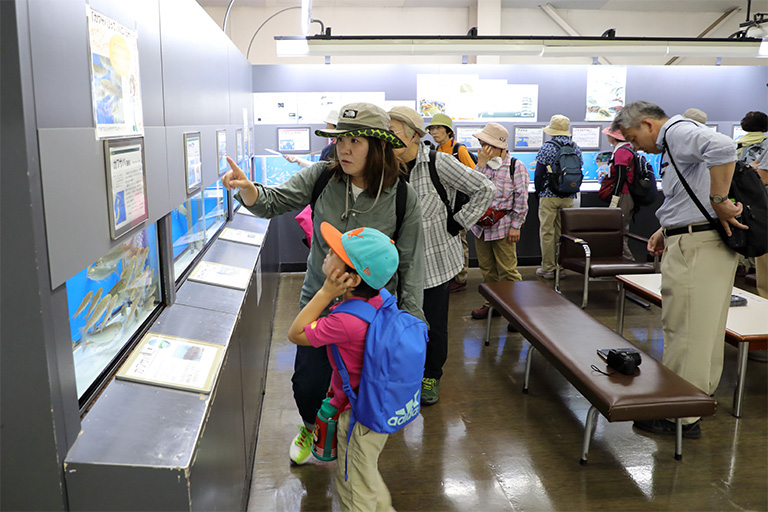 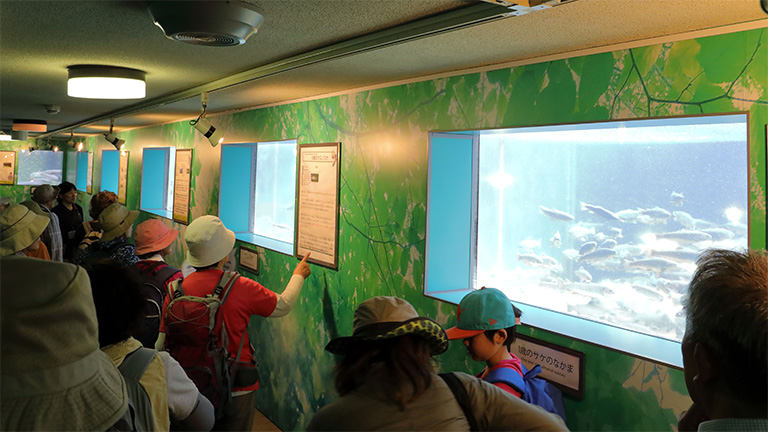 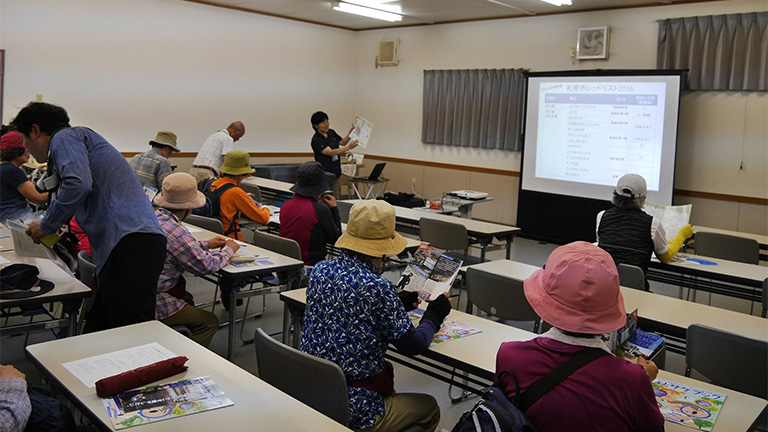 After leaving the Sapporo Salmon Museum, we walked through Makomanai Park. We headed for Makomanai Station, looking at the Makomanai Irrigation Canal (a waterway built-in 1879 to draw water from the Makomanai River to the cattle ranch) that runs through a residential area, and the tour was dismissed. I was told by one of the participants that many of the participants knew each other from other footpaths and that they enjoyed the walk. No wonder everyone was talking and walking lightly. The return course was uphill, which made a big difference to me, who was too busy walking to talk much. 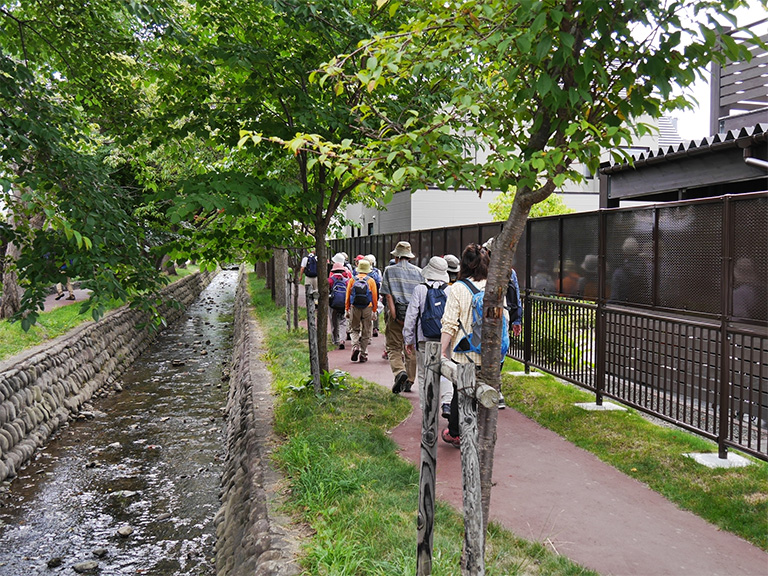 The course took a little over two hours, but I was healed by the rich nature and was able to walk without getting too tired. Thank you to the curator of the Sapporo Salmon Museum for the interesting talk. The second and third footpath tours will be held on a different course from this one. Each time we will walk around the river, and local people will give us explanations. Why don’t you come and experience it for yourself? It’s fun! By the way, my waist size did not change.