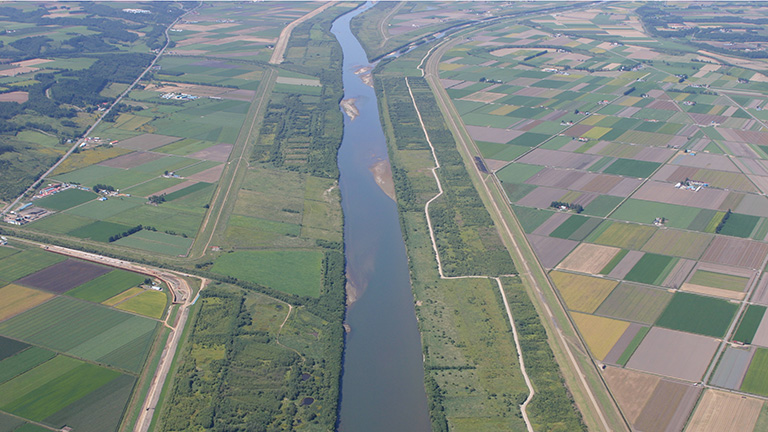 The Tokachi River extends for dozens of kilometers from Toyokoro Moiwa area that is located about 20 km from the estuary to the upper reaches of Chiyoda area. Many will be surprised to hear that the Tokachi River is a man-made river.The Tokachi River Middle Reaches Tounai that is now an arable land that used to form great wetlands, with a sprawling poor-drainage peat bog and the Kimunto swamp at the center.

Let’s go on a historical journey of the anti-flood control and river improvement.

Japan’s population rose during the latter part of the Meiji period and Hokkaido gained attention as a supplier of food and resources. The Hokkaido Development Plan began in Meiji 43 (1910) where a plan was drawn to straighten the flow of the Tokachi River lower reaches and develop the surrounding of the Tokachi River.
After the big flood during Taisho 11 (1922), the Anti-flood Control and River Improvement project started in Showa 3 (1928). 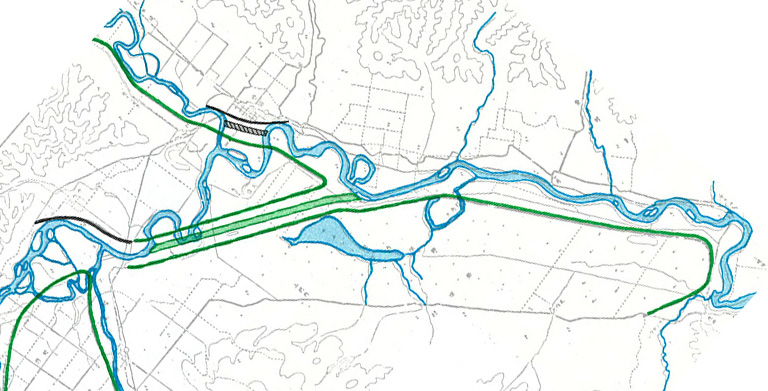 The plan was initially to build a waterway (green line) that passes from Chiyoda through Kawai area and connect the present-day Kyutoshibetsu River. However, many people from the Kawai area who would end up losing many of their lands due to this project spoke out against it and said “We will not allow it if the field that we protected gets dug up and used as an embankment”. This resulted in a major change for the new waterway plan to pass through Kimunto swamp. 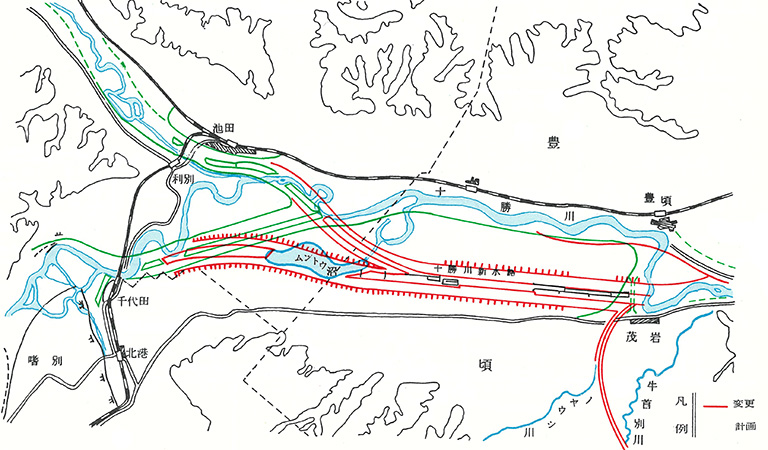 It is believed that the plan changed starting from a tea-table chitchat of the village people, escalating from a statement of “If the Tokachi River did not exist” to “Maybe it can be changed to the Tonai side?”.
Perhaps it was Benzo Yoda whispering from heaven to the villagers?
This dream-like desire by the villagers became a reality through the mobilization of the region and government. There is one more person that must be highlighted in this movement. That is Seishu Saito, the one who pushed for the revision of the plan and completion of the construction.He continuously held the position as chief for anti-flood control and river improvement for Kushiro River, Tokoro River, and Tokachi River from the Taisho period to the Showa period. Because of this, he is called the father of anti-flood control and river improvement for Kushiro River and Tokachi River. The following text is based on his memoir.

Hardships during the revision of the Tonai New Waterway Plan (Excerpts from Seishu Saito’s “Kono Michi 50 Nen”)
“There was a slight increase in the construction cost upon further studies on the implementation of the plan. However, I arrived at the conclusion that it is best to revise the route of the new waterway upon considering land development and river maintenance.We applied for the revision of the plan to the interior ministry. The application documents passed from the technical manager to the construction manager in a matter of hours until they finally reached Yoshizo Nakagawa, the chief engineer of the interior ministry at that time.
The chief engineer took a glance at the plan and exclaimed ‘What is the meaning of this reckless revision?’. I made an effort to explain even though I was afraid. ‘If that’s the case, then submit a record on this’, he commanded.
However, it was impossible to produce a detailed record. I summarized it by relying on memory until I barely managed to receive an approval. It took 10 days.”

That is what’s stated in the memoir of the man who overcame many hardships and accomplished the revision of the plan. There is no doubt that the indomitable spirit of Benzo was passed on to the residents and officials who love the Tokachi Plain. 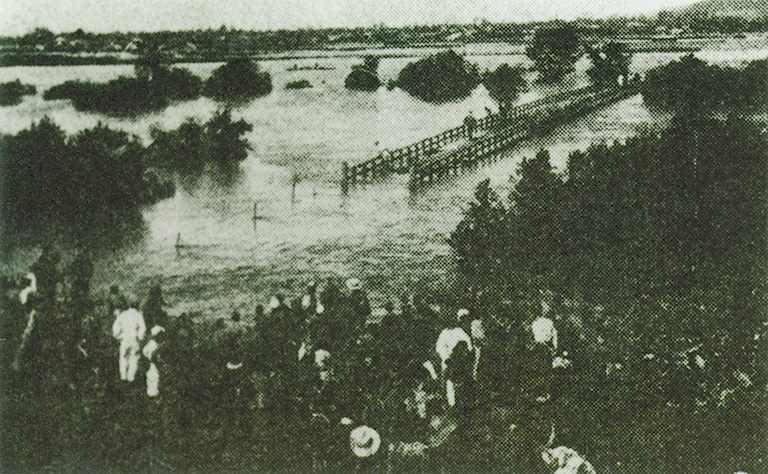 This Tonai New Waterway Project started in Taisho 12 (1923) and was completed in Showa 16 (1941) around the beginning of the Pacific War. During that time, the plan was revised in Showa 6 (1931) and the construction was executed in a speed that exceeded expectations. If the construction was delayed, perhaps it would not have been completed due to the effects of the war. There was a happening that greatly reduced the construction period as if in anticipation of the war.
During Showa 12 (1937) when most of the waterways were completed, a great flood occurred. A muddy stream surmounted the embankment for construction and flooded the new waterway, causing water to flow at once in the Tonai New Waterway.Perhaps the gods gave all of Benzo’s luck to the farmers in return. This is how the Tonai New Waterway, also hailed as one of the best anti-flood control and river improvements in Hokkaido, was completed. It now ensures the safety of the people who live in the basin.

The drainage of Tonai area which used to be a rugged wetland with Kimuunto marsh in the center improved because of the new waterway, transforming the whole area into a rich, arable land. Nowadays, most local residents do not even know that it is an artificial river (new waterway). Nevertheless, it creates a river environment that is in harmony with the surrounding landscape of cultivated lands. 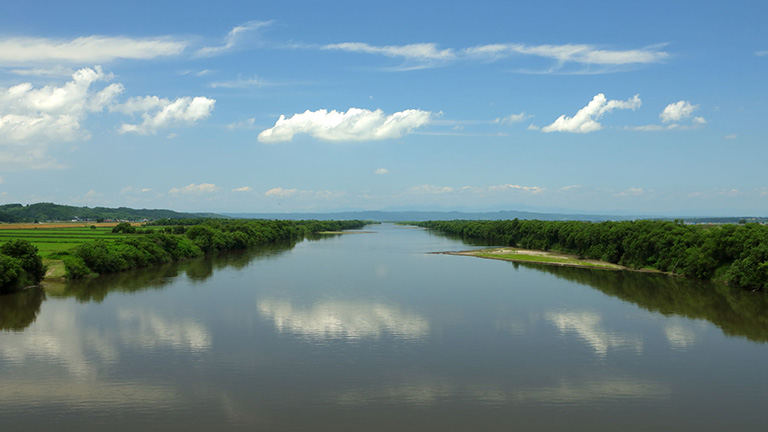