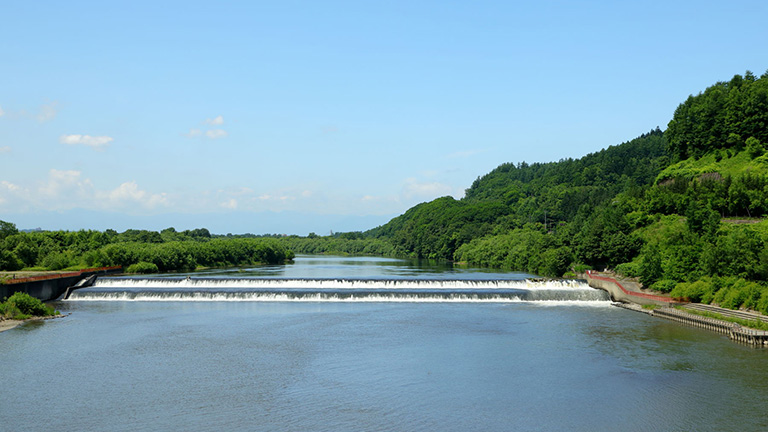 The Chiyoda Dam that was built in the middle reaches of the Tokachi River was completed in Showa 10 (1935) as a water intake facility for agriculture. It is also being used as a water intake facility for water used in salmon and trout fish farming.In Heisei 16 (2004), it was designated by the Japan Society of Civil Engineers as a Civil Engineering Heritage Site after receiving high ratings as a historical civil engineering site from the same organization.
Currently, it also serves an important role as a harvesting site for salmon eggs. The views of magnificent stream flowing down the dam and salmon bouncing off the water surface are tourist attractions in Tokachi. 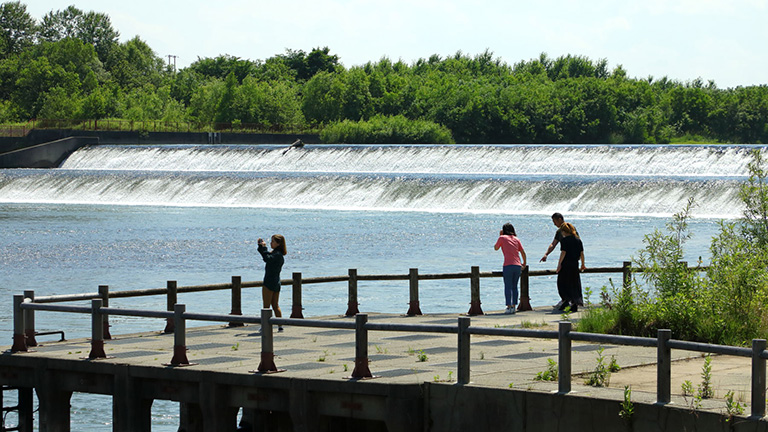 The Chiyoda Dam cannot be discussed without talking about the farmers who had hardships because of the water intake for farming and for the Tonai New Waterway project.
The Tonai New Waterway, as you know, is a project that converted 15.8Km of the Tokachi River from Moiwashita to the lower reaches of the Chiyoda Railway Bridge and was completed in Showa 16 (1941). The river that used to be bent became straight because of the New Waterway which made it easy for flood to flow to the lower reaches.However, the faster flow of the river carved out the riverbed. The phenomenon of the riverbed being carved out gradually spread to the upper reaches until it became large scale. The building foundation of bridges and various facilities in the river were dug up and destroyed, while places that used to intake water from the river became unable to do so.This is why the riverbed had to be fixed and the digging up of the riverbed had to be stopped. To achieve this goal, facilities called ground-sills and drop structures were created.
The stream gradient becomes steeper along with the Tonai New Waterway so it is necessary to install ground-sills as anti-flood control and river improvement.
On the other hand, the farmers during that time took water from the Tokachi River which is indispensable in cultivating crops. However, the rampaging Tokachi River instantaneously destroyed water intake facilities that were created, changing the river flow and rendering it useless.The farmers wanted a facility that will allow them to take farming water from the river, but it was challenging to make it a reality because of the high costs.
To stop the riverbed from being dug up, a plan was made to install
ground-sills as anti-flood control and river improvement and to build the Chiyoda Dam to raise the water level for the farming business. It was like killing two birds with one stone because it was cheaper to build the facility and the maintenance was easier than if a farm business had to do it on its own. Who did Benzo Yoda whisper to this time?This construction commenced building in 1932 (Showa 7), was completed in 1935 (Showa 10), and ended up costing 186,000 yen for earthwork union fee, 157,000 yen for anti-flood control and river improvement fee at that time, for a total of 343,000 yen (about 700 million yen if converted to current rates). There are now two levels of drop structures after another level was added to the one during the initial completion when the lower reaches riverbed declined.

The Chiyoda Dam became one of Tokachi region’s tourist attractions because visitors can enjoy the elegance of its magnificent stream and mass salmon run in autumn. New tourist attractions are expected to become popular since various events are being held such as an Ainu traditional ceremony in the recently established riverside park downstream. 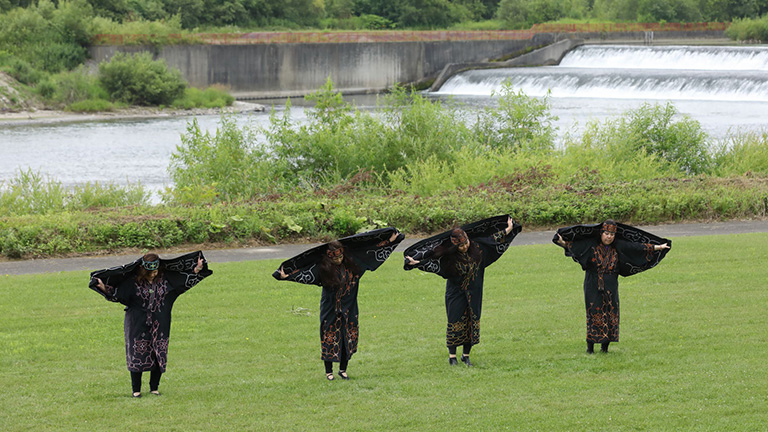