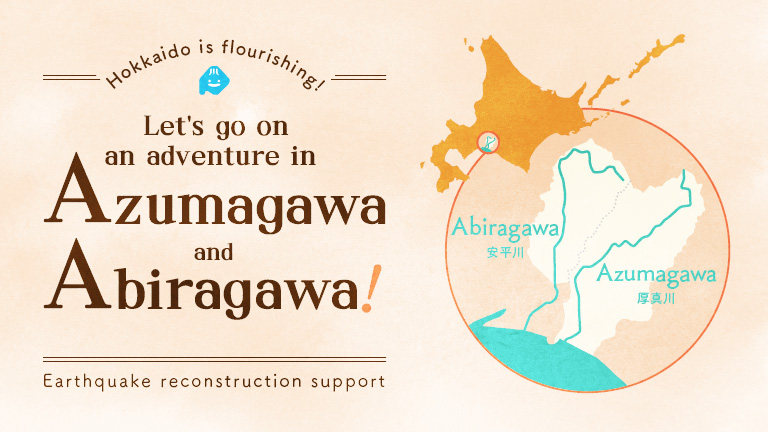 The Azumagawa and Abiragawa are the rivers that flow through the Atsuma-cho and Abira-cho, two places which were damaged during the 2018 Hokkaido Eastern Iburi Earthquake on September 6, 2018. There were areas that experienced power and water outages after the earthquake, but they have recovered now and commercial spaces have also resumed business. Donations helped in the recovery of areas struck by disaster, but visits by tourists contribute to disaster recovery as well. Let’s go on an adventure in the Azumagawa and Abiragawa basins!
※Some roads are closed in certain areas. Please check the latest information with the local government.

Azumagawa and Abiragawa are second-grade rivers that run through the Iburi region in the southern part of Hokkaido.
Atsuma-cho, where the Azumaga flows, is surrounded by mountains and seas; it is an excellent place to experience nature, but at the same time, the easy transportation access allows for day trips from Sapporo, Chitose, and Tomakomai.
On the other hand, Abira-cho, where the Abiragawa flows, is a place where Japanese cheese is produced and it is also known nationwide for pioneering dairy farming. It is a town that was formed through the merger of Hayakita-cho, known for producing light breed horses in the recent years, and Oiwake-cho, the location of the Oiwake Station that used to play an important role in Hokkaido’s railway system. Azumagawa and Abiragawa’s water is used for agriculture in certain areas, providing rejuvenating life to the region’s agriculture. 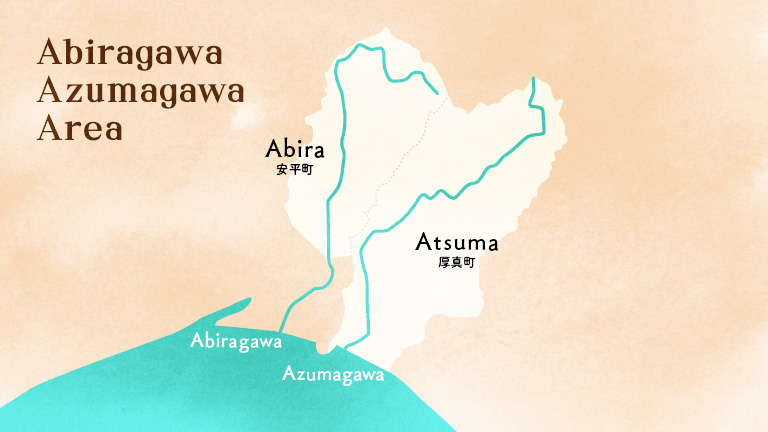 The town has completely recovered from power and water outages that occured after the earthquake.
Please check the latest safety information regarding weather and others through the homepage.

What kind of river is Azumagawa? 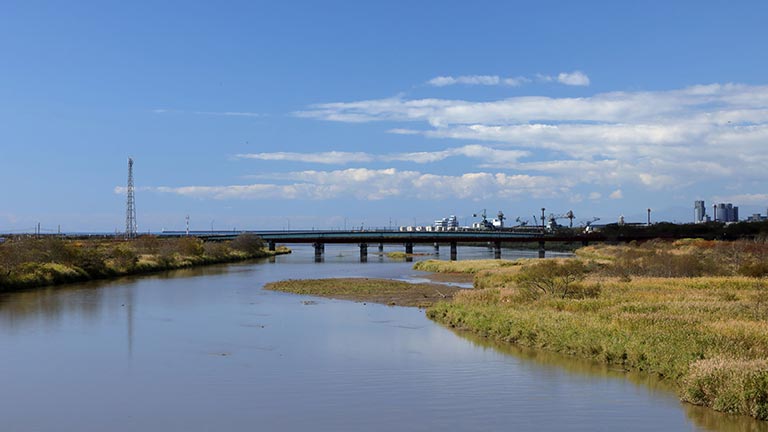 Azumagawa’s source is the hilly terrain in the northern part of Atsuma-cho and it pours to the Pacific Ocean through the Hamaatsuma area in the same town. The Hamaatsuma coast near the estuary is known as one the most prominent surfing spots in Hokkaido, and it’s a place where fans of surfing and body-boarding gather from different places in Hokkaido. According to one theory, the name of the river comes from the Ainu word “Atomapu” which means “a place of elms” (based on the Azumagawa River System Improvement Plan). Nowadays, the name of the town is Atsuma-cho, but the name of the river is Azumagawa.

Let’s check the main attractions of the Azumagawa basin!

A must-see twilight that will leave your breathless! 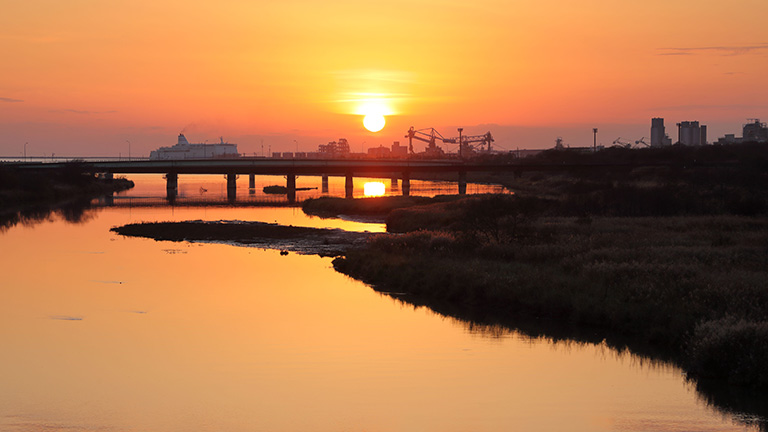 Dozens of meters to the west of the popular surfing spot of Hamaatsuma Seaside Park is the Azumagawa Estuary where a breathtaking sunset setting into the ocean can be seen. The silhouette of the Tomato Atsuma Thermal Power Station on the right side of the picture creates a nice ambiance. If you’re lucky, you might also get an invaluable chance of observing wild animals such as Japanese deer crossing the river.

The only northern berry in the world, nurtured with the blessings of Azumagawa! 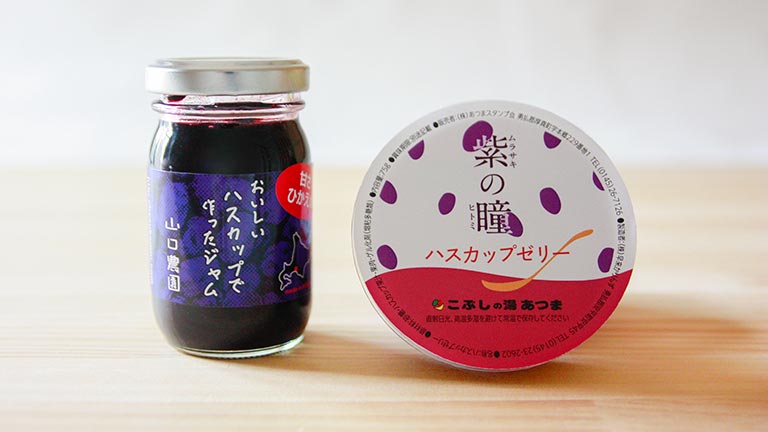 The Azumagawa basin is known in Hokkaido as a place where the Haskap grows. The Haskap is cultivated in 22 hectares of land, the largest in scale in Japan. Azumamirai and Yuushige are endemic varieties of Haskap that are cultivated only in Atsuma-cho; they are utterly sweet and they go against the image of being small and sour. A variety of products such as jam and jelly are sold in the town.

A famous local sake bearing the name of the river.
Made of 100% brewer’s rice from the rice-producing Atsuma-cho 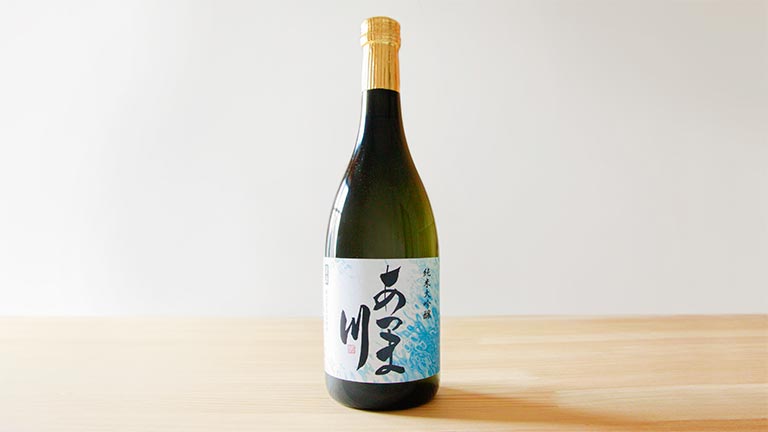 Atsumagawa uses 100% “Suisei”, the brewer’s rice that is cultivated from the rice-producing Atsuma-cho. It is brewed in Kinteki Shuzou located in Shintotsukawa within Sorachi. It is a famous local sake that does not contain anything other than water and malted rice from Hokkaido. It is a rare local sake that is only sold within Atsuma-cho.

Popular among volunteers and support staff from outside of Hokkaido!
It’s tastiness, juiciness and fillingness makes you crave for more. 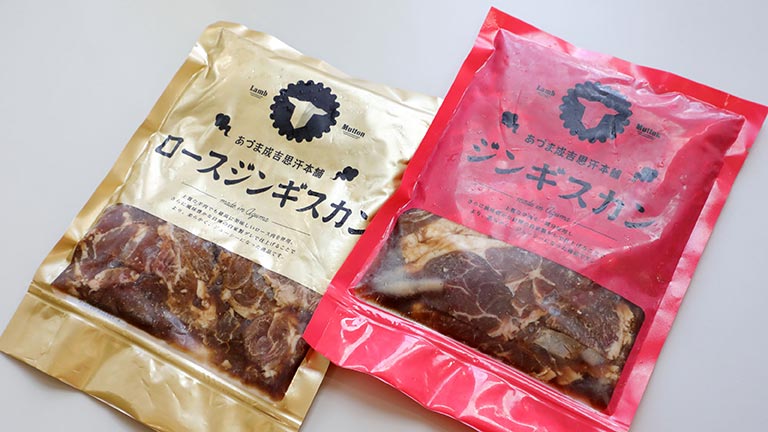 A filling slice of Genghis Khan that is about 1 cm in thickness made by aging carefully selected mutton. The homemade sauce is concocted by adding ginger to natural ingredients from Hokkaido; it does not have a long shelf-life because it is not processed with heat. It is said that the enzymes from its main ingredients such as apples and onions are alive and make the meat tender.
If you visit the Azuma Genghis Khan Main Store (Ichihara Meat Shop) where it is sold, you will find that it is bustling more than ever with tourists visiting to support the disaster-struck area. It is said that it’s also popular among volunteers and support staff from outside Hokkaido who are there to support recovery!

A must-try if you want to experience local gourmet such as pork rice bowl using select pork from swine grazed in Atsuma-cho! 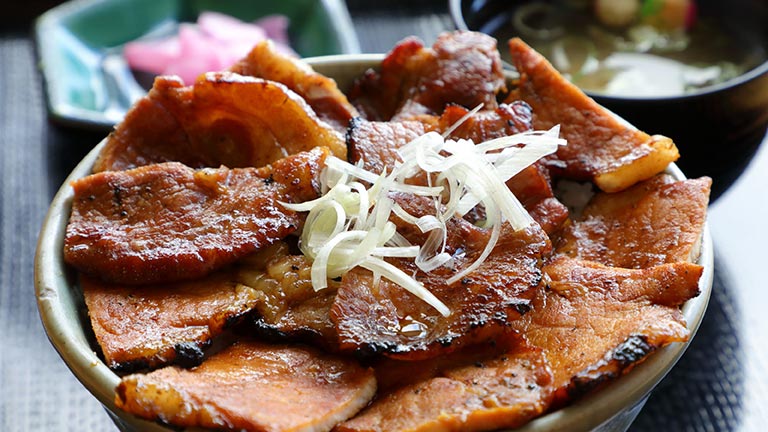 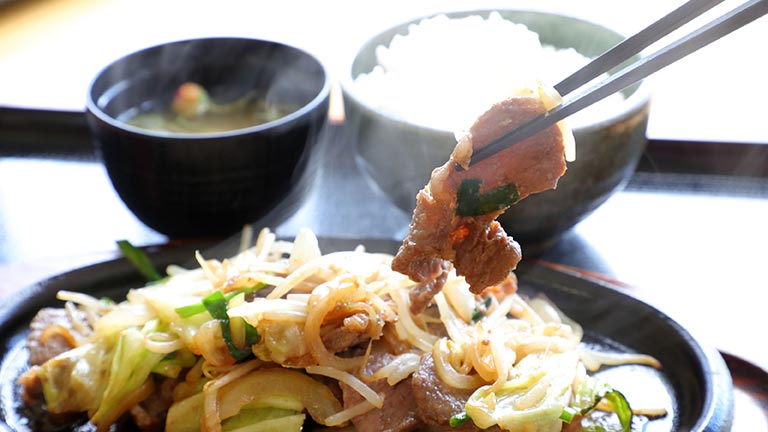 Restaurant Kobushi is a restaurant located in Kobushinoyu Atsuma and it is popular gourmet spot in Atsuma-cho. It suffered from power and water outages after the earthquake but it was able to resume operations on September 27, 2018.
The restaurant is perfect for group dining. The menu is comprehensive with specialties such as pork rice bowl that uses select pork from swine grazed in the town and Azuma Genghis Khan!
(The warm bath and accommodation facility of Kobushinoyu Azuma resumed operations in November, 2018)

A tasty tofu made from soybeans nurtured with the bounties of Azumagawa! 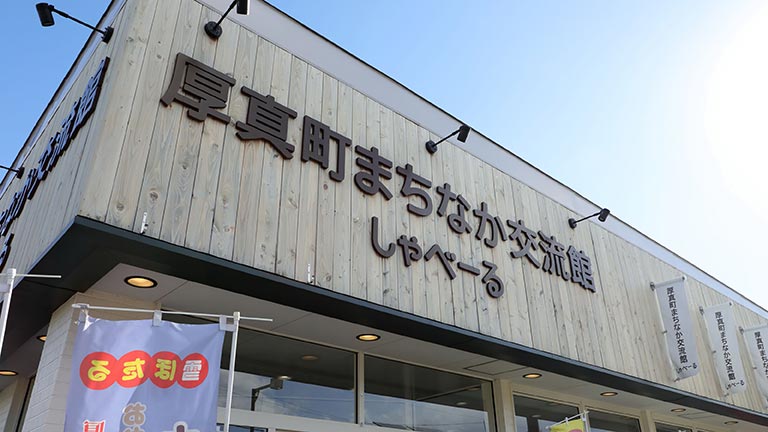 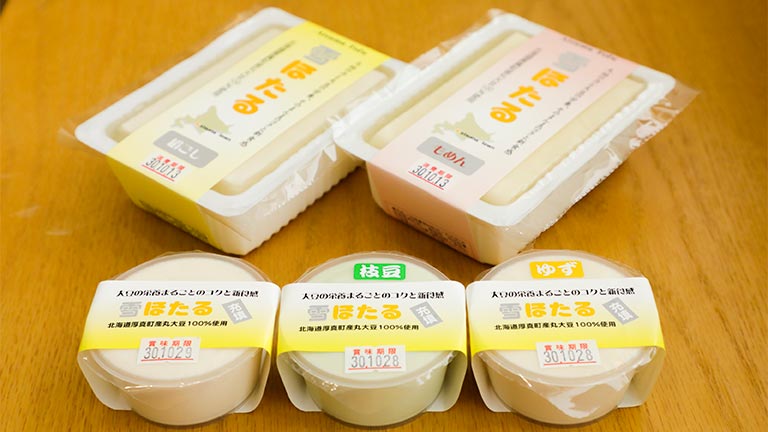 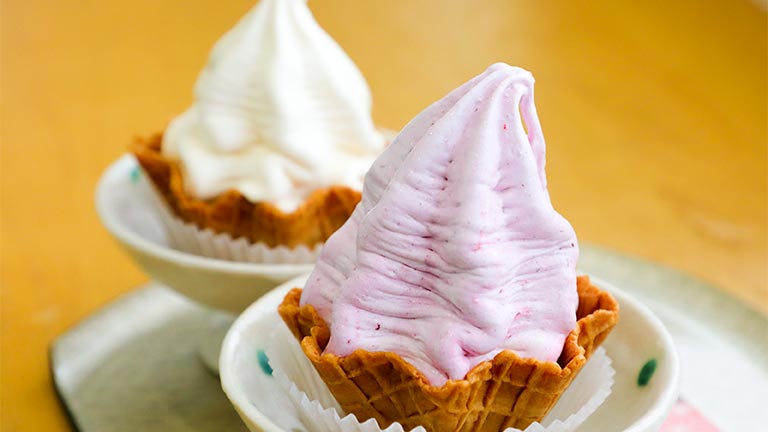 Atsuma-cho is a well-known place that produces soybeans in Hokkaido. By pulverizing the soybeans that were cultivated with the bounties of Azumagawa, a fresh-style of tofu with no residues–the “Whole Soybean Tofu Yuki Hotaru”–was born. Yuki Hotaru won a gold medal in the packed tofu category in the the preliminary round of the 3rd National Tofu Competition in Hokkaido.
According to Machinaka Community Center Shabe-ru that sells the tofu, many people buy the tofu to support disaster recovery. It is also possible to observe the tofu-making process within the facility.
Haskap soft-serve ice cream and miso soft-serve ice cream that uses local specialties are also sold here.

Aliens might be waiting for you!?!
A must-visit resting spot while touring Atsuma. 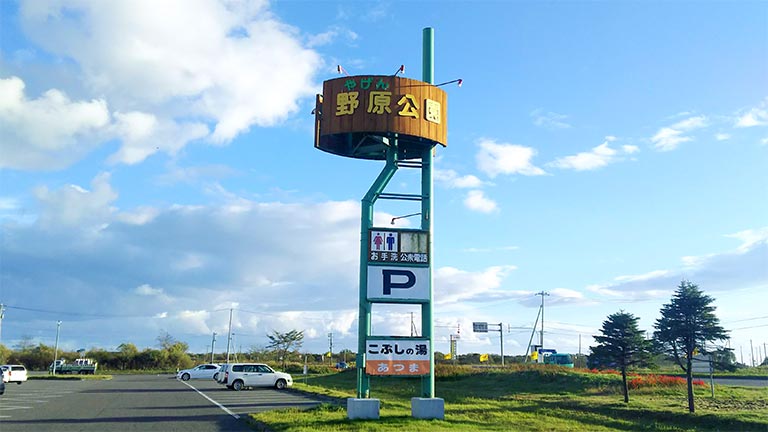 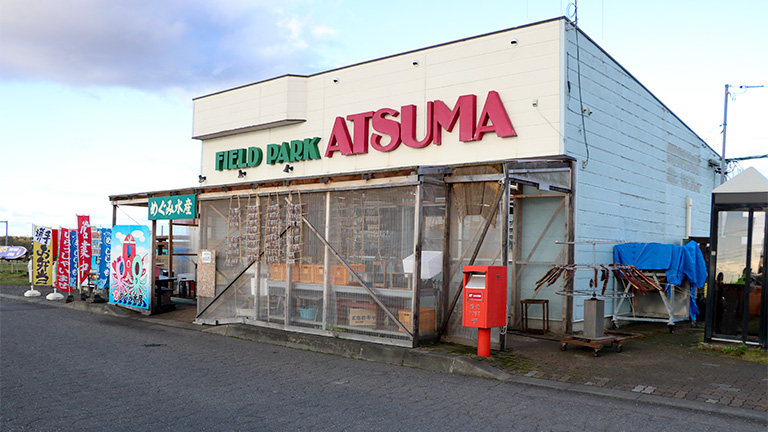 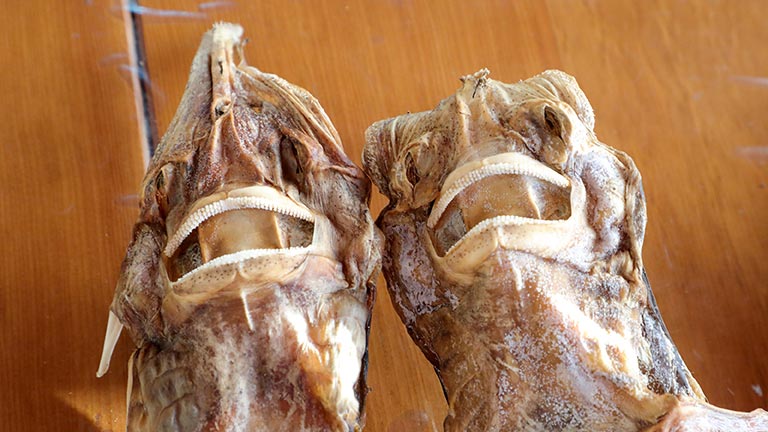 Hamaazuma Plains Park is a sports park located along Japan National Route 235. It has a full-scale soccer field that is well-known in Hokkaido for its 3 natural grass fields. There are wide parking spaces and toilets beside the soccer ground, providing a good spot to rest while touring around Azuma.
The shop beside the parking space called Megumi Suisan serves shishamo fish dishes as well as freshly-caught shishamo fish from Mukawa. The storeowner had an idea and came up with the alien (dried ray) that will surely get reactions if you post it on social media!

What kind of river is Abiragawa? 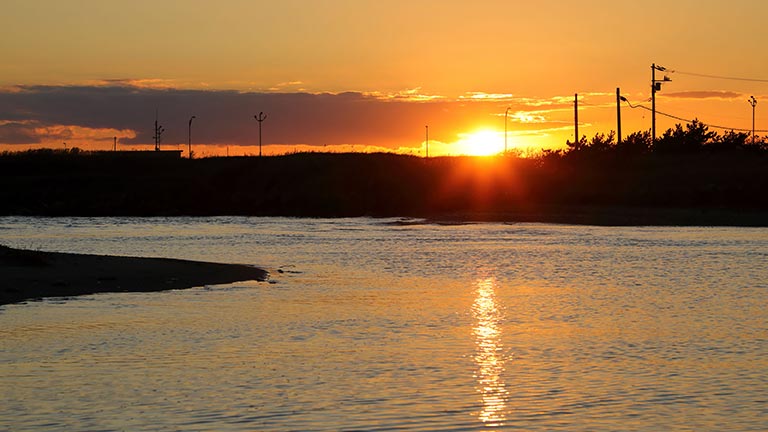 The Abiragawa comes from the Shiabiranupuri found in the border of Hokkaido’s Yuni-cho and Abira-cho. It flows through agricultural lands of Shigaichi and Mizuta in Abira-cho, and it pours to the Pacific Ocean through the eastern part of Tomakomai City. According to a theory, the river’s name comes from the Ainu word “Ara Pira Pet” which means “Fragment Cliff River”. (based on the Abira-gawa River System Improvement Plan)

Let’s check the main attractions of the Abiragawa basin?

Abiragawa is just across the tracks!
A variety of racehorse goods are also available. 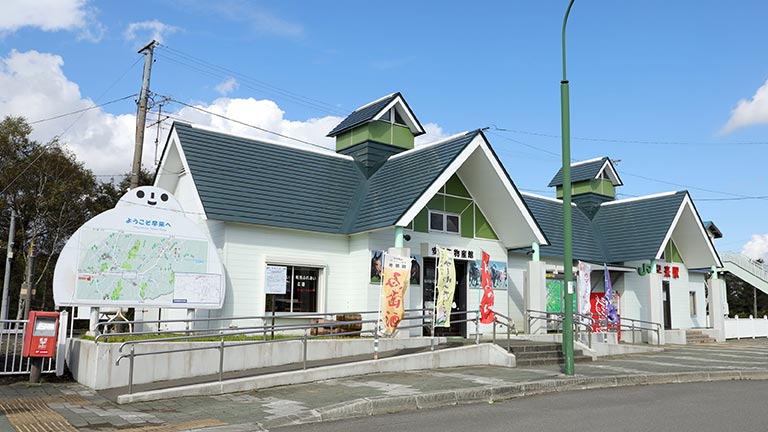 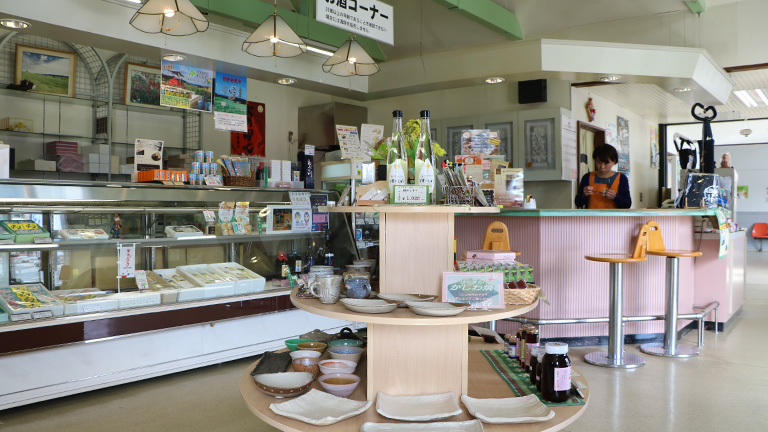 The Abira-cho Product Shop is located side-by-side the Hayakita station. The clear stream of the Abiragawa can be seen immediately upon crossing the overpass bridge. The shop sells a wide-range of line up of souvenirs, ranging from cosmetics using local rape flower, Hayakita’s specialty cheese, and horse-racing goods. There’s also a coffee stand in the shop that serves heart-warming freshly brewed coffee.
According to the shop’s staff, the cosmetics using rape flower cultivated in Abira-cho and rape flower oil are secretly popular.
The Nanakanba Deep Impact that won the “Abira-cho Special Honor Award” as well as the Gentildonna are also displayed.

Specialty goods from Abira-cho beloved by a certain superstar.
Popular items from the menu are being served again by direct sellers! 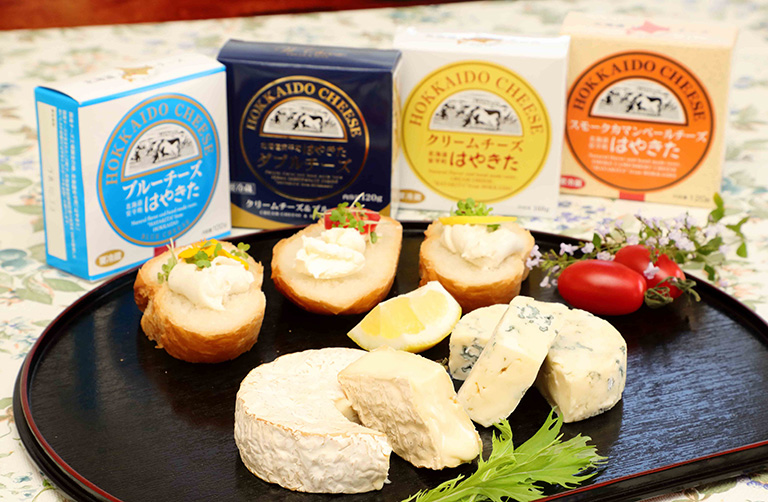 Abira-cho is where the first cheese factory in Japan was built. Natural cheese such as camambert and mozarella produced by Process Group Muminsha Ltd. are gaining popularity as specialty goods representing the town.
According to Tomiko Miyamoto, the storeowner of Restaurant Miyamoto, which is a direct seller of the cheese, the cheese production resumed on September 18, 2018, after halting due to the effects of water outage and others after the earthquake. Since then, there has been a rush of orders from all over Japan and supplies are running low. It is expected that the full line-up of the products will be available by November, 2018. 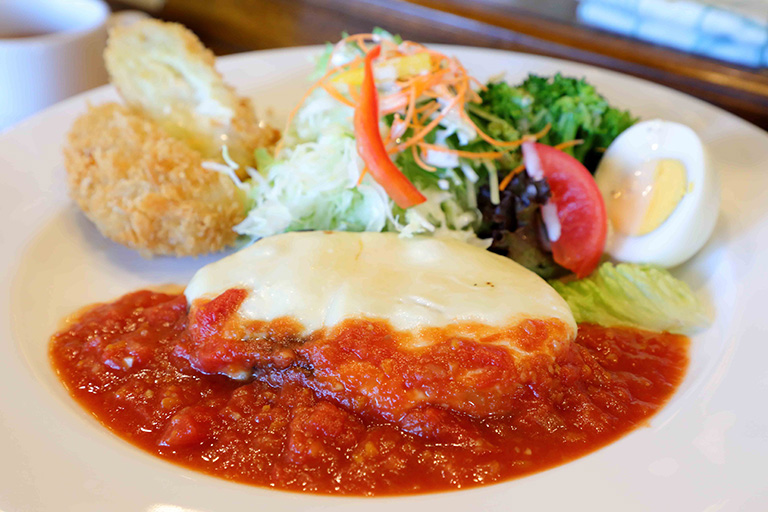 The restaurant resumed operations with a limited menu on September 15, 2018. As of now, it has resumed offering popular items from the menu such as mozarella hamburger and camembert croquette, and caciocavallo and vegetable hamburger. 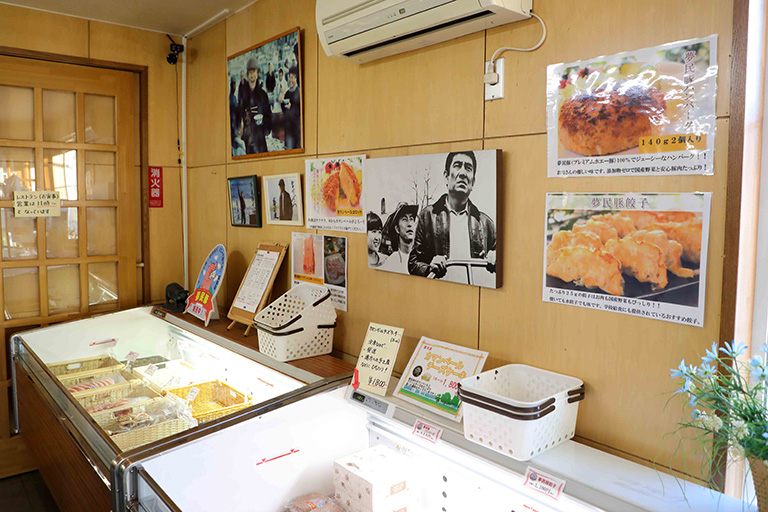 The company’s cheese is known for being a favorite by the movie star Ken Takakura who visited Hokkaido to shoot a movie. Pictures of interactions and letters from Ken Takakura are displayed in Restaurant Miyamoto.

Discoveries in Abira-cho!
A famous sake bearing the name of the local river 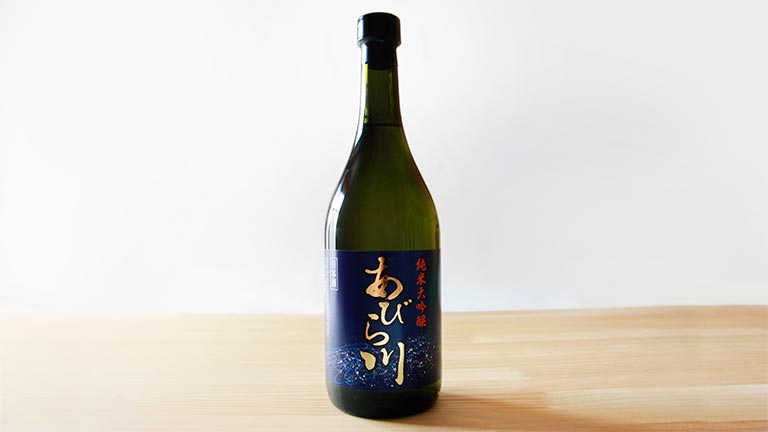 The Junmaidaiginjo (pure rice, super premium) Abiragawa is a Japanese sake that is made of Suisei, a brewer’s rice produced in Abira-cho. It is characterized by its fruity aroma and rich flavor the moment you take a sip. It is brewed in Nisekoshuzo (Kutchan-cho within Shiribeshi). Try it out and compare its taste with Atsumagawa, the local sake of Atsuma-cho.

A snowman-shaped mailbox and a red “singing snowman” welcomes you. 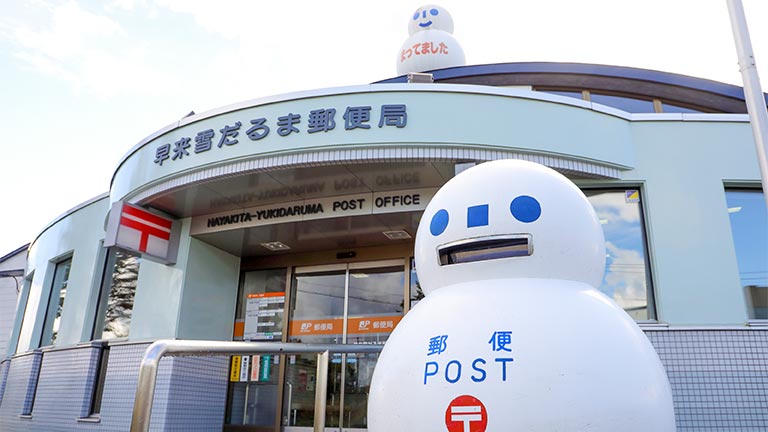 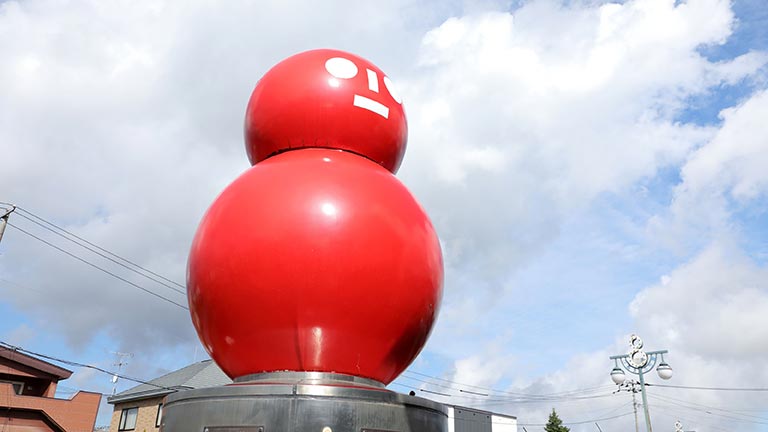 Was it a crane that passed the knowledge?
Famous local hot spring also known for its beautiful autumn foliage 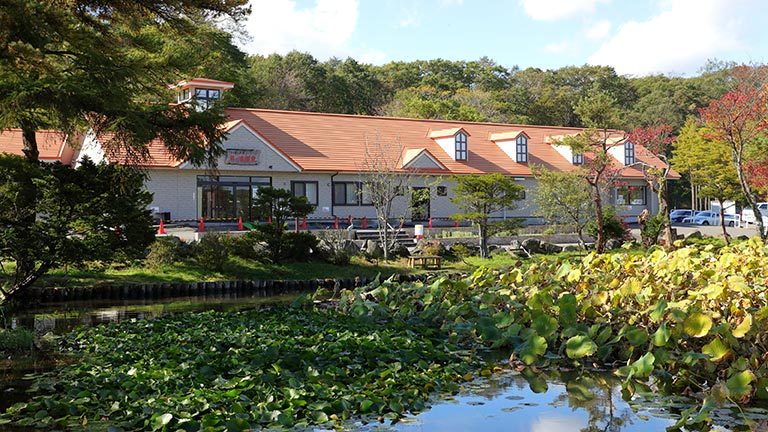 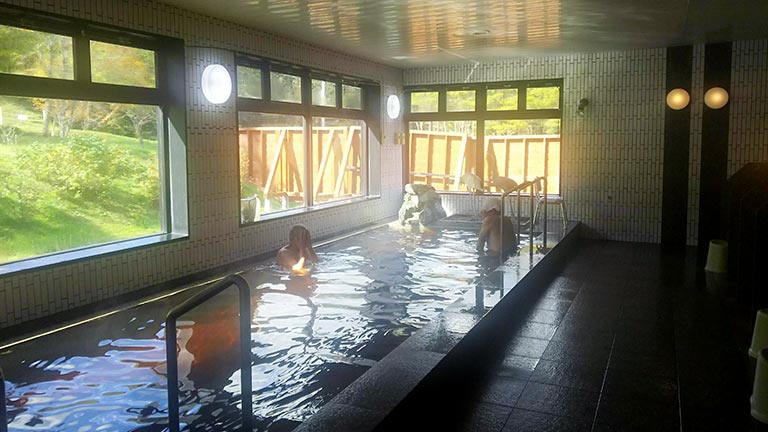 Tsuru no yu Onsen got its name from a story that a sick tsuru (crane) recuperated and flew again after taking a dip in the cold mineral spring. Since then, it became known as a sacred spring with healing powers.
According to its staff, the onsen was able to resume operations several days after the earthquake and provided free access to victims. The place is known as the second oldest onsen spot in Hokkaido and it also offers beautiful views of autumn foliage in its garden. Although cranes do not come over, guests are welcomed with crane art pieces.
Mid-August each year is the best time to check out lotus flowers proliferating on the pond.

Discoveries for a railway enthusiast!
Let’s feel the history of Hokkaido’s railway. 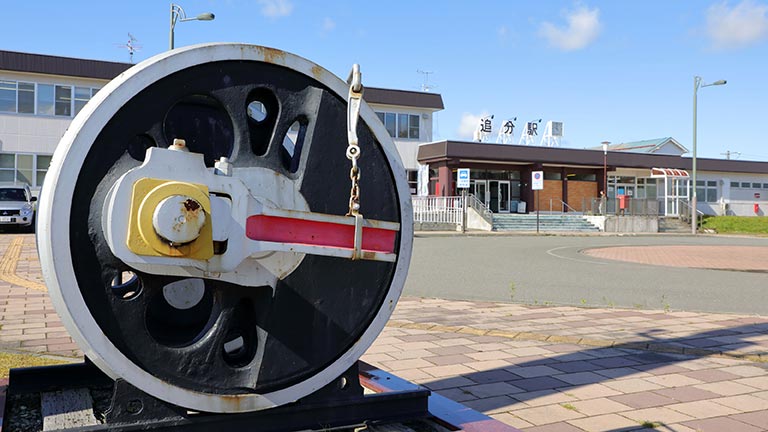 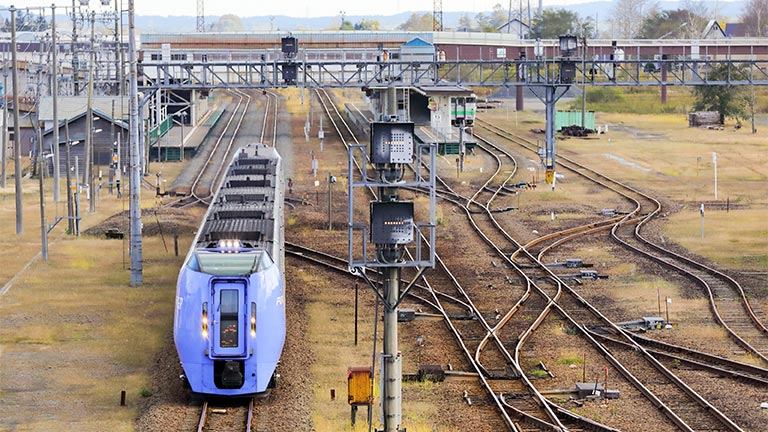 Oiwake station flourished a long time ago as an important point in Hokkaido’s railway system where a number of steam locomotive trains (SL) used to come and go. Their presence started to dwindle with the adoption of diesel cars, and on December 24, 1975, the last SL train in Japan left Oiwake. The facade of the station building is decorated with iron wheels that is reminiscent of the old times.